Features over 70 species of greenhoods and rustyhoods found in Victoria. Each species is lavishly illustrated by multiple full colour photographs, along with information on where and when to find them.

Spider Orchids: The Genus Caladenia and its Relatives in Australia 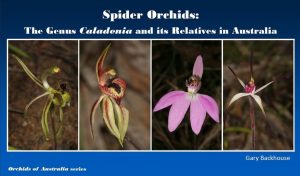 This is a new publication on the genus Caladenia and its relatives (Adenochilus, Cyanicula, Ericksonella, Eriochilus, Glossodia, Elythranthera, Leptoceras, Pheladenia and Praecoxanthus), and covers the 395 species and subspecies of orchids in the subtribe Caladeniinae that occur in Australia. The work is 844 pages long (landscape format) and is illustrated with over 7,800 photographs, including photos of 143 naturally occurring hybrids. Every species is featured with descriptive text and a distribution map and for almost all species there are multiple photographs showing whole plants, flowers and labellum details. This work represents the most comprehensive presentation of Caladenia and its relatives in Australia ever undertaken.

This document has been prepared to assist administrators (e.g. those in government agencies that recommend surveys for certain species), landowners, land managers, property developers, forest managers (e.g. those that are told they need to have a survey undertaken) and field botanists (e.g. those actually doing the surveys) in making rational decisions regarding the timing of surveys for orchids. It may also be a handy reference for orchid enthusiasts and botanists who wish to see what is likely to be flowering at any given time during the year.

This Common Orchids of Tasmania Identikit is part of the Tasmanian series of Plant Identikits.

Bush Gems: A Guide to the Wild Orchids of Victoria, Australia

This is a new publication on the wild orchids of the Australian State of Victoria and covers the 400 species of orchids currently recorded as occurring there. The work is 855 pages long (landscape format) and is illustrated with over 7,000 photographs. Every species is featured with descriptive text and a distribution map and for almost all species there are multiple photographs showing whole plants, flowers and labellum details. This work represents the most comprehensive treatment of the rich temperate terrestrial orchid flora of Victoria (complemented by a small number of epiphytes) ever undertaken.

The colourful terrestrial orchids of Victoria flower from Spring over Summer. We can admire the many yellow or purple blooms of the Diuris from late Spring, whilst the mostly pink Dipodium hyacinth-orchids are Summer flowering. The magnificent blue, pink or yellow coloured Thelymitra sun-orchids show over Spring and Summer, and with numerous flowers on a spike the Prasophyllum leek-orchids from Spring to the end of Summer.

Victoria’s Cryptic Orchids is a comprehensive guide to selected terrestrial genera and comprises species that usually blend in exceptionally well with their surroundings. It includes the Beard, Elbow, Onion, Midge, Duck, Horned, Tongue, Fringed Hare, Mosquito, Gnat, Bird and Helmet Orchids. As their vernacular name implies, flowers feature unusual looks and may have an intriguing insect-like appearance. Their looks serve to go unnoticed, but they emit a special scent for their specific pollinators to find them. Flowering times of the various species are in tune with the flying times of their particular insect pollinators, combined with best suited environmental conditions. Most Victorian orchids flower only briefly during a specific time of a season, but at any time of the year a particular cryptic orchid may be in flower.

Orchids of Western Port and Surrounds

Looks at over 100 species of orchid found in the Western Port region from the Mornington Peninsula east to Wonthaggi. Each species is depicted by multiple colour photographs and contains information on when and where to find them.

Orchids of the Anglesea district: a field guide.

An accurate record of all orchid species and hybrids found in the East Gippsland region as observed by local field naturalists over 50 years. Introductory chapters include orchid structure, pollination and habitat description. The main chapter is a description of species in generic order and contains 1-3 photos of each species, leaf, stem and flower features, flowering time, distribution, similar species, special notes, and status if rare and endangered.

While this guide covers only orchids found in the East Gippsland region, it is of significance to other regions in observation of the populations and variants found in this region. East Gippsland is a diverse region geographically spanning coastal habitats, lowland, rainforest as well as alpine habitats.

Orchids of the Hunter Region

Over 150 orchid species were found while collecting orchid specimens from the Hunter Region for the herbarium at the Botanic Gardens Trust, Sydney. This book is a pictorial guide to those orchids, with information about identifying features and flowering times.

Elisabeth Burton has been a life-long naturalist; a botanist, bushwalker, photographer and bush regenerator. Over the last ten years her interest in botany has been focused on Australian native orchids. 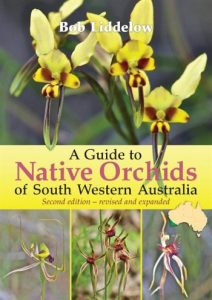 Be warned! If you purchase this book you may become as addicted to finding, and photographing, native orchids as much as its author. This is an Orchids Guide with a difference. Instead of covering all species with total distribution areas, this book treats a very representative collection of orchids in great detail. The specific sites for each orchid are illustrated with ‘mud maps’. The book also cross-references some 239 orchids with about 200 sites in the greater south-west of Western Australia. Every orchid is illustrated fully in colour. There are also comprehensive Indexes, a Glossary, Author’s Notes and more.

A wonderful introduction to 130 native orchids of the Margaret River and southwest capes region of Western Australia. Full of clear colour photographs, this book will aid in identifying orchids found not only in this region, but also the International Biodiversity Hotspot. Each species is illustrated by at least one photograph and details are provided on appearance, habitat, distribution and flowering times.

In September 2011, Heritage Bushcare published Start with the Leaves: A simple guide to common orchids and lilies of the Adelaide Hills by Robert Lawrence.

This book is for anyone interested in orchids from the complete novice, who would like to know about plants, to landholders, and bushwalkers through to bush-carers and professionals completing biological surveys 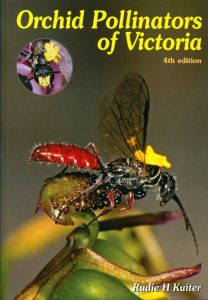 There is so much to learn about the world of orchids and the role which insects play in the pollination of such highly evolved plants. Orchids and insects are constantly under attack by the human race – ruining their environment – clearing and burning habitats, and the overuse of insecticides. Without the wasps, bees and flies we would not exist and they should be valued like all other wild creatures for the protection of habitats, and realise the importance of their diversity. To observe the pollinators in action it is essential to have a good understanding of nature, be familiar with the insects, and be very patient. The intriguing role insects play in orchid pollination is documented in this book. With more than 1,300 superb images it will give the insects the appreciation they deserve, even if they may bite or sting.

Orchid pollinators of Victoria 2: nectar-rewarding leek orchids and their allies. 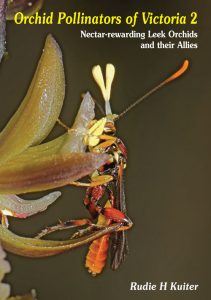 The terrestrial orchids of Victoria are reputed to attract pollinators by deception and the highly specialised strategies used were well covered in Orchid Pollinators of Victoria, 4th edition. The nectar-rewarding orchid pollinators received only basic treatment and are elaborated on in this companion volume. Initial observations indicated different aspects to orchid-insect relationships and this deserved more attention. Orchids that have food-rewards attract a greater variety of visitors, but these include non-pollinating or pollinia-robbing insects. To compensate for losses a large number of flowers are needed on the same plant, but these are often cross-pollinated and geitonogamy is common. The various strategies have evolved from adapting to environmental changes to sustain populations, each of which producing ample viable seeds for eventually some to become adult plants. Nectariferous orchids may be the least specialised of the Victorian taxa, readily adapting to changes that occur at a natural rate, but they are far from being safe. Habitats in the few areas left since colonisation are changing too quickly, and deteriorating at an alarming rate. Destruction of ecosystems continues, critically reducing the suitable orchid habitats by clearing and logging. This is accelerated by prescribed burning and many of the endangered species are driven to extinction

Field Guide to Orchids of the ACT

A high quality, comprehensive guide to native orchid species of the Australian Capital Territory. Principal author David Jones is a respected authority on Australian orchids.He has made a special study of the orchids of the local region, describing many newspecies. This book contains excellent colour photographs, large botanical illustrationsand full descriptions of the 121 species found in the ACT. Specific local distribution notes will aid the ACT orchid hunter,