Writing a guide to the beetles of Australia is no simple task. According to the Australian Museum, there are potentially 30’000 species that may occur in Australia. Only two-thirds of these have been scientifically described.

The authors accomplished something amazing with this book. They’ve provided an overview of most beetle families that may be encountered in Australia. This is done via brief descriptions of 17 superfamilies as well as 91 families. Usually, I would struggle with this type of format and become overwhelmed. Instead, I was greeted by a fun read that I’ll be referring to a lot on my entomology journey.

The Writing Is Captivating

I often rate the usefulness of a guide according to how easy it was to identify a species using the book. In this case, it was the writing style that made it stand out. It acknowledges that the reader is an amateur and tries to make it fun.

I really enjoyed the introductory chapters – something that rarely happens, despite my enthusiasm for entomology. A lot of terms were introduced but were done so in a compelling way. I actually wanted to pause research Batesien chains and the potential of insects to learn.

This theme is continued throughout the guide. The sections of family descriptions give an overview of identifiable features but also share interesting facts about the species. Even the image captions have little tidbits of information. The technical terms are clearly explained.

This style means that you can choose to read the guide in order, or you can flip through and read the chapters that interest you. It is also a valuable book to return to if you have identified a species and want to learn more about similar species.

The family descriptions are similar to the species profiled featured in other books. Here, however, the authors cover significantly more information.

The beetle families are organized according to superfamily; although the superfamilies themselves are organized according to suborder. Very little information is given about the suborders other than notable features. This section also details the relevant pages where you can find more information about superfamilies. This can sound overwhelming, but the way it is structured actually makes it easy to follow.

Chapter sizes vary according to how many described species there are within the family and how much is known about the beetles. Carabids, which have 295 genera and about 2575 described species, have seven pages dedicated to them. These pages have a lot of images and inserts. Other chapters have just one paragraph accompanied by an image.

The common name and the basic identification features listed as bullet points at the top of each chapter. These quick species descriptions often cover information about the antennae and tarsal formula. I would frequently return to the introductory chapters to understand these key features; however, that is normal when reading a new guide.

The extra information is quite useful. The chapters cover:

This is very helpful to the amateur naturalist who may want to look into something further. You also get extra boxes with interesting facts about specific species. 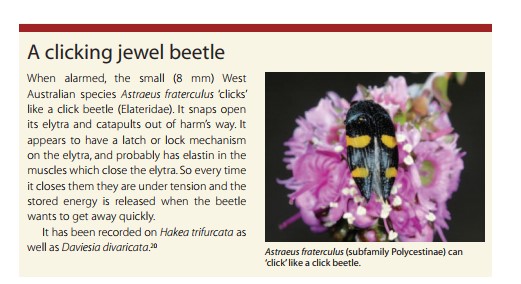 I wouldn’t buy this if you are wanting to be able to identify a species to genus. Other books feature many of the common species such as Backyard Insects. Alternately, you can try the Australian Beetles series. However, this is significantly more complex, and only 2 books in the series are currently published.

This guide is now out of print. You can buy it second hand or borrow it from your local library.