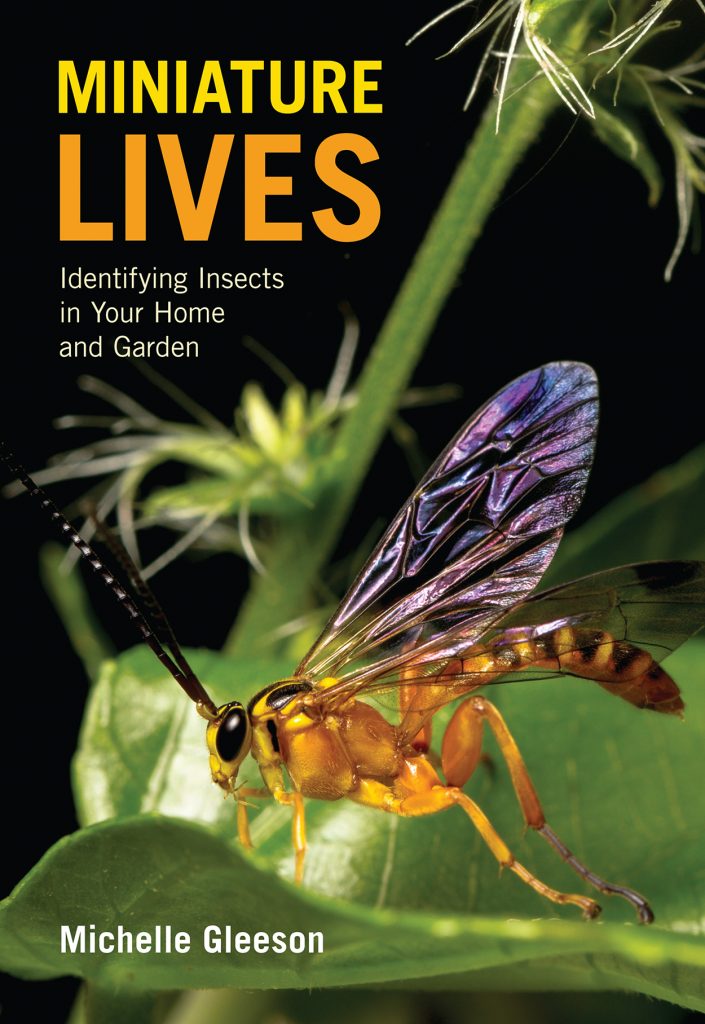 Miniature Lives is my second favourite guide for identifying insects. I love Backyard Insects but eventually outgrew it. I had bought other insect field guides but was struggling. It was sheer information overwhelm and a completely different scenario than bird identification.

Michelle Gleeson created the perfect book to introduce readers to more advanced methods of identifying species. She has worked hard to make it really user friendly to help the reader build up the necessary skills to identify insects.

As it is slightly more advanced, readers won’t always be able to identify a specimen to species level based on this guide. It’s likely you’ll need further resources. However, it allows the layperson to learn more about entomology without scaring them away.

The book is organized into four main sections:

Gleeson makes sure to connect all the chapters. If you are unable to identify an insect using one approach, you can try a different one. 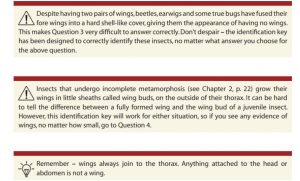 I struggle to identify smaller species based on their physical attributes. Many dedicated field guides have lengthy chapters dedicated to understanding the different parts of an insect or arachnid. It is still overwhelming.

Fortunately, Gleeson doesn’t immediately dive in with pictures and lengthy descriptions of anatomical features. Instead, she provides an identification key that allows you to figure out what the species is based on yes/no answers. Some of these questions can get technical, but she clarifies some of the trickier terms in additional boxes.

I liked this approach to identification. It isn’t as confusing as other books I’ve read. It is more time consuming than some basic guides. However, the goal is to encourage you learn while making the ID.

The habitat section focused on species that the average person if likely to find in their home or neighborhood. Such habitats are broken down into species you’d find around your home, species that can be found in your fruit and vegetable garden, and those that are attracted to light.

There are other sections dedicated to species found on native plants and in leaf litter. The species featured were those that I had often seen previously and had to ask for identification online, such as with craneflies and waterbugs.

The clever clues chapter is organized into four main sections:

This is summarized into just 16 pages. Most people will find that this section is enough to meet their needs and figure out what type of insect is leaving the clue. The reader is often recommended to check out pages in other chapters for more information.

I was left disappointed in some cases and wanted more information, especially in regards to galls and lerps. However, this is more a reflection of where I was in my entomology journey rather than a criticism of an already comprehensive book.

The insect order section is the most comprehensive portion of the book, with 18 orders being described 0ver 100 pages. Each order goes for 5 or 6 pages, featuring information about whether the species is a goodie or baddie; interesting facts, life cycle and further reading. The key information is presented in a summary box which contains details about the number of species, sub orders, key features and background information about the order itself. Where necessary, additional information and summary boxes are provided about the more prominent suborders, such as bees and ants.

This can be slightly overwhelming. Gleeson goes into detail about the physical characteristics that can help you narrow down a species to suborder. She makes the descriptions as user friendly as possible. Unlike Backyard Insects, this requires more work. You can’t just flick through and find the species that looks similar. This section is one that can be read in the one sitting, but will likely be referred to repeatedly as you expand your knowledge. I found it frustrating at times as I just wanted the quick identification, so I could move on to photographing the next species. I had to remind myself that the goal is to slow down and teach myself to recognize the defining features of an insect.

My only fault is that some of the pictures weren’t as clear as they could have been. However, this is understandable considering that insects are tricky to photography.

Definitely! It is the perfect book for beginners who have learned as much as they can from Backyard Insects but aren’t quite ready for Insects of South Eastern Australia. It will require a lot more work, but this extra work is necessary if you want to learn more about insects.

While you wont be able to satisfy a need for a precise ID, it will encourage you to think beyond just flipping through a book to find a species. It encourages you to think about the morphological characteristics, habitat and structures that they may leave behind.

This skills are so useful and ones that can help in other areas of natural history.